Relief grant of between R350 and R595 a month considered - report 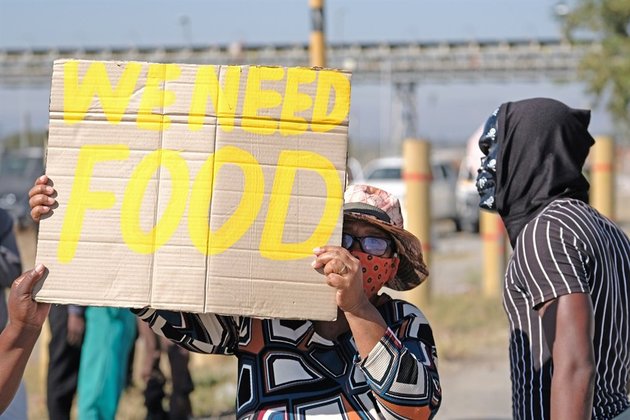 The South African government, business and labour leaders are discussing the payment of a relief grant to alleviate suffering after the worst unrest since the end of apartheid.

While labour and business leaders recognise the need for some assistance after the riots, there is a debate over whether the stipend should be temporary or the start of a form of a basic income grant. The violence that began after the imprisonment of former President Jacob Zuma left at least 215 people dead, devastated businesses and put jobs at risk.

"A grant needs to be sustainable and affordable within our constrained fiscal environment," said Martin Kingston, vice president of Business Unity South Africa, a lobby group that represents many of the biggest companies in the country. "We therefore think there needs to be a reprioritization of expenditure as well as an acceleration of implementation of structural reform. The reconstruction and recovery plan needs to be adjusted."

The presidency declined to comment beyond confirming that discussions are taking place, while the Treasury said it would comment later.

Treasury in February slashed planned expenditure on everything from welfare and education to defense, after the economy last year contracted the most in a century because of the coronavirus pandemic.

President Cyril Ramaphosa on July 18 raised the possibility of a basic income grant in a speech, without giving any details. Last week's violence could cost the country about R50 billion in lost output and jeopardised at least 150,000 jobs, the presidency said on Tuesday.

Cosatu, the biggest labour federation, urged the government to restart the payment of a R350 a month grant that it had paid out for a period during the earlier stages of the pandemic.

"We're confident it will happen," said Matthew Parks, the parliamentary coordinator for Cosatu. "The R350 Covid-19 grant is a central pillar. It needs to be reinstated across South Africa. It is a basic income grant in essence. It can be improved, enhanced, gremlins addressed once it's implemented."

The cost of reinstating the grant at that level would be R24 billion a year, he said.

Ramaphosa may announce the aid in coming days, Business Day reported, without saying where it got the information. Talks are being held between the presidency, the Treasury and the Department of Social Welfare about how large the payments would be, how long they would last and who would receive them, the Johannesburg-based newspaper said.

Monthly payments of as much as R595, the food poverty line, and as little as R350, the amount that was paid for a while during the pandemic, are being debated, the paper said. There is concern among some government departments that once started, the payments would be difficult to stop and would be the beginning of a basic income grant, it said.