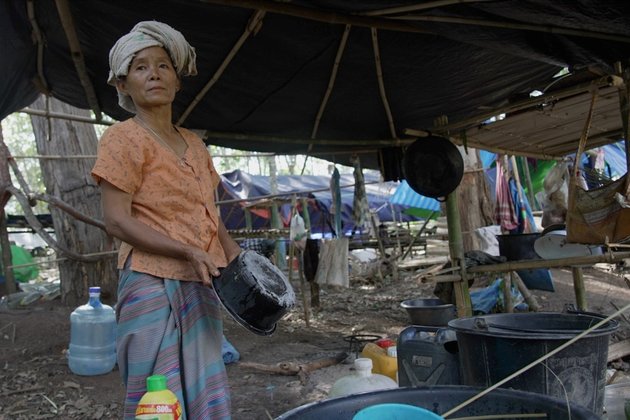 UMPHANG, THAILAND - Kayin farmer Khaw Mying looks up to the dark, cloudy sky as she attaches a bamboo panel onto the side of her makeshift hut in the temporary camp for displaced people at the edge of a rubber tree plantation.

In a normal year, rain clouds would be a welcome sight for Myanmar farmers at the start of the growing season, but for Khaw Mying and thousands of other agricultural workers in the country, the skies have brought much worse down on the people.

In Myanmar, Burmese army airstrikes and indiscriminate bombardments have intensified this month, pushing the total number of displaced persons to record highs.

As of May 2, there were an estimated 936,700 internally displaced people in Myanmar, including 590,100 newly displaced since February 1, 2021, according to the UNHCR, the United Nations refugee agency.

Farmworkers separate cotton from the stems, in an IDP camp on the Thai-Myanmar border. (Steve Sandford/Asiareports)

In Kayin state, as with many other ethnic regions of the country, farmers and their families are afraid to return home to plant seasonal crops, as battles between the army and opposition forces draw the conflict closer to civilian targets.

For 52-year-old mother Khaw Mying, who fled from the village of Pa Na Tha six weeks ago, the memories are still clear.

'Before I fled to this camp, I couldn't start planting corn and rice because Burmese soldiers fly jet planes and drop the bombs before we can go to work in the field," Khaw Mying said.

"They get into the village, but they use planes to bomb my village," she said.

"Farmers are facing a myriad of issues and challenges due to years of impacts of climate change, drought and now the Myanmar military's coup," said Ismail Wolff, senior advocacy specialist at Fortify Rights, a human rights group.

"If farmers are unable to tend to their land, there will be no crops, which means food insecurity for them and the local community," Wolff told VOA.

A Karen farmer drops off goods and food supplies at a Karen IDP camp on the Thai-Myanmar border. (Steve Sandford/Asiareports)

As junta forces face increased resistance by opposition troops on the ground, they have turned to brutal attacks from above, creating fear and panic for the villagers.

"We've actually seen some of the fiercest fighting recently in the Central Plains, including in Magway and Sagaing, where most of Myanmar's farmland is," added Wolff, referring to two of the country's regions.

Local and international rights and aid groups have been documenting junta attacks on civilian locations in what rights groups say amounts to attacks intentionally directed against civilians.

Collecting evidence since the February 2021 coup has come at a cost for the Free Burma Rangers, a multiethnic aid group formed by ex-U.S. Special Forces veteran and former missionary David Eubanks in 1997.

"So, the biggest thing people need is for someone to stop the Burma army from attacking and bombing them, strafing them with airplanes, helicopters, armored vehicles, mortars, machine gun, artillery," Eubanks said, adding that the aerial assaults have taken a deadly toll on his team.

"We saw all of it. In fact, 10 of our rangers have died since the coup, which is about 10 times a normal year for our relief work. It's terrible," Eubanks added.

Local groups are also calling for stronger condemnation of the army air attacks.

The Karen Women's Organization, a local group monitoring and delivering aid to displaced people, said in a statement, "The situation on the ground in Burma must be referred to the International Criminal Court and action taken to stop the junta from continuing to perpetrate war crimes and crimes against humanity."

Farmworkers separate cotton from the stems, in an IDP camp on the Thai-Myanmar border. (Steve Sandford/Asiareports)

In addition to the air bombardments, the reported increased use of landmines - by all armed groups both supporting and opposed to the junta - has further restricted access to farmland.

Figures for this year's first quarter show 100 landmine casualties across the country, 35% of last year's total, according to the U.N. Office for the Coordination of Humanitarian Affairs.

For workers like Naw Soe, whose farmland is now part of a war zone, the reduced income and food supply created by the lack of access to the fields is an added hardship to their lives.

Naw Soe and her husband were forced to flee their home in Pa Na Tha.

"Some of the landmines that soldiers planted have exploded and some didn't. Many of the bullets shot from the jets landed on the farmland. Karen soldiers were able to remove some landmines that weren't planted too deep and took them out of the farms and destroyed them," she said.

The Free Burma Rangers have also seen an increase in landmine victims during their relief trips in southeast Myanmar.

"There's always been mines used in this 73-year war in Burma, but since the coup it's gone exponentially," Eubanks told VOA.

"From January this year to February, 32 people in one township area of Karenni [Kayah] state alone - where we were - 32 stepped on landmines, including men, women and children." he said.